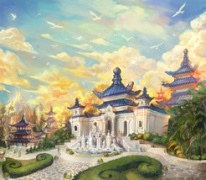 Yuanming Yuan, the garden of gardens was constructed throughout the 18th and the early 19th century in China. It's a summer palace for the royal family of Qing Dynasty. It was not only a masterpiece of the traditional Chinese garden but a combination of the western mansion. However, the garden was destructed during the Second Opium War. The building architecture and numerous art and historical treasures vanish or lost from the destruction.

There’s a lovely melody in nature world, but only a few people can hear it! These people we call them "Horticulture Master", and different plants passing through their hands can be transformed into a beautiful garden. Also, they learn to handle them with water, air, sun and other specific elements. Then they can build a unique garden.

In Horticulture Master, players try to take on this role. Each player takes three actions, and they can collect elements, exchange elements for tools, and build their own garden. When someone finishes the board, the game ends. The player who has the most points wins.