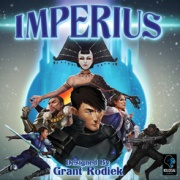 Imperius is a game of intrigue and conflict for 2-4 players. Each round players will draft cards (including their enemies'): ambassadors, assassins, elders, nobles, and even powerful variable events. After drafting, players then deploy these cards to planets with the hopes of scoring and depriving their enemies of victory points. But be wary, as some of these cards will be deployed face down. Will a noble seize control of the planet or will an assassin be waiting for them in the shadows? Each round is a tense and epic struggle for control.

Play continues until one or more houses earn 20 victory points. The house with the most victory points then takes the Crown Imperius and rules over the Known Universe.