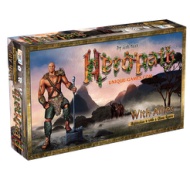 "Now I shall haunt you, until you know the wrath of the flames, for this is my vengeance."

If the Giant was told one year ago where his life would take him, he would not have believed it… and no one would have even heard of the goblin-slaying Giant. The Giant was a peaceful farmer who was content with his life, he bothered no one, and no one bothered him. That all changed after that one cursed winter… when the goblin raid started from the Caves of Doom – it was that same night when the goblin's fury torched 1,000 straw huts, and the air was filled with fear. It was from that same fire and pain that a hero and a legend was formed, the Giant who stood against evil and returned the favor twice over.

Expansion 1: The Giant
1. In this expansion we added one more hero and one more hero board which allows a total of 5 participants – which of course intensifies the game experience and allows more people to participate.
2. In order to improve the game experience we added a team of sub-heroes called "Allies". Each hero can convince (by increasing his faith) an ally to join him to his journey.

Such as: new cards, new tactics, extra accessories and even extra enemies.
Also there are special "Allies" dice that improve significantly the hero performance.
Beyond that – the hero does not fight alone anymore; he has a team of fighters who add interest to the game.