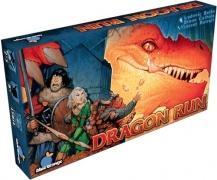 In Dragon Run, the players have just raided a dragon's keep, picked up a bunch of loot, and awakened the dragon. Now it's time to flee, ideally making it out with both our treasures and our lives.

On each turn, a player can either advance boldly, flee cautiously, or cry like a baby. If you advance boldly, you draw a card from the location deck, which holds three types of cards: one that allows that player to either redraw or stop, one that grants new treasure from the treasure hall, and (of course) the dragon. If you draw the dragon, you lose one health point (out of two), the dragon calms down (i.e., it loses one temper point), and the location deck is reshuffled. If you're injured twice, you die and are out of the game.

When fleeing cautiously, you first discard a treasure worth at least one coin, then roll a d10. If your roll is higher than the number of cards in the location deck, the dragon calms down, then you reshuffle the location deck; otherwise you must draw a card from the location deck just as when someone advances boldly. Your sacrificed treasure is still lost.

When you cry like a baby, you don't draw a location card, instead discarding a treasure worth at least two coins. Having shown your obeisance to the dragon, the turn passes to the next player.

Players start with four treasure cards; while some cards are worth 1-5 coins, others provide a one-shot potion or a talisman that stays in effect until the location deck is shuffled, which ends the round. Gameplay lasts from 5 to 8 rounds. Each player has a unique power that can be used once per round: the thief can steal cards from opponents, the cleric can heal opponents in exchange for treasure, etc. If the dragon loses its final temper point, the game ends and whoever holds the most valuable treasure wins; if all of the adventurers are charred to death first, then the dragon wins instead!