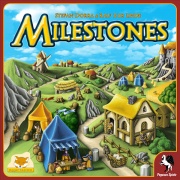 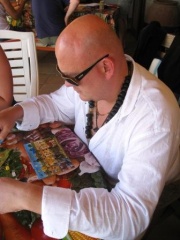 „The idea for the game Milestones came to me during a stay on the Mediterranean island of Mallorca, where the entire network of roads bears tightly-packed, white-yellow mile markers typical of the islands in the area. These are not relics of bygone days, but rather an essential tool for navigating the island, even today in the times of TomTom and GPS. Virtually every rural mailing address is specified by an appropriate milestone.
It is probably due to my selective perception that I discovered similar milestones in my native Germany only afterward. Here, from time to time, you'll spot a milestone hiding in the high bushes, often disintegrated beyond recognition. The reason for this is that the local milestones – if not restored due to some work in the area – are very old and have long since ceased to be relevant for navigation. On the larger trade by-ways, though, the milestones that have been in place in this country since the 17th century are important benchmarks for the division of different areas and the planning of day trips. In a similar way, the postal mile markers have also played an important role – and all of this goes back to the Romans and the Greeks, who in ancient times used stones to mark distances on their streets.
From the perspective of a game author, the division of land by milestones makes for an exciting topological subject to be broken down into a game – but my initial focus was not one in which you'd develop stretches of land and road networks that both divide and connect different areas, but rather the planning process for the erection of the actual milestones. I wanted to know how the construction materials – the stone and wood – were acquired, how workers were organized, how funds flowed to pay for everything, and so on, while having all of it depicted in the game in some manner. The nature of the repetitive sequences of numerically-ascending milestones at the proper distances should be the driving force for these procurements. And so the idea developed for cards with up to four numerically consecutive procurement actions. The illustration below shows two such cards, which can be viewed separately or combined to create a longer ascending sequence of numbers.
The first test I undertook was with these "card rows". Each player was able to create his own card row and move his pawn steadily from left to right, with the pawn beginning again at the left after reaching the right edge. Each player could change or enlarge his personal card row, but only so long as the ascending sequence of numbers was kept. To make this climbing concept possible without overly restricting the players, I increased the number limit to 100.
This range turned out to be far too broad, as my friend

Stefan Dorra showed me in the course of development after I had created samples of my idea. Stefan had the important idea of making the range of number spaces much narrower – only up to 8 – while giving players freedom on other levels. He also reduced the number of elements on cards so that each card had only two game elements with two numbers (instead of four). Our initial tests with this stripped-down material so clearly demonstrated a positive effect that we decided to keep working on a trial basis with the idea of a personal card row. The newly designed cards now looked like this:
As before, each player would move with his pawn from left to right on this row to acquire items or actions. We would collect sand, stone, wood, money, etc. – and so it was now time to solve the topological problem of creating a game board that would then be studded with milestones for dedicated roadways. For this purpose, we created a large game board composed of many triangular units. On the corresponding lines the road pieces would be placed, while the intersection points were reserved for the placement of the milestones (the heart of our game). As you can see, the first game board had qualitatively different regions, with a river crossing the countryside. The reason for these different textures was the idea that construction costs would differ depending on the terrain, while certain areas would be off-limits entirely.
We realized quickly that building suitable card rows would be demanding and complex enough for the overall feel of the game, so we decided to minimize the level of complexity in the game board. This realization proved even more true when it turned out that our time-evaluation mechanism was not catchy enough and always proved to depend too much on established paths, milestones and houses. Thus, we first removed the river, then the different land types, then kept searching for as simple an evaluation mechanism as possible in order to keep the focus on the card rows being the heart of game play.
We eventually found this simplicity in the direct and obvious way of placing values on the board.A milestone was now worth as many points as the value of the space on which it was established. So simple! With this approach, players could also quickly evaluate the value of houses and markets built, namely the sum of the visible values at either end of the road segment.
Although we viewed the board with a high level of satisfaction, we weren't entirely happy with the feeling of the game as a whole. This was due to the card rows supplying us with the needed resources, but the spending of those resources being fairly uncontrolled – that is, we were using the raw materials to build milestones, houses and markets whenever we desired. It was only after a long search that we had the breakthrough idea for the game, that being to transform the card row into a circular course, or rondel. This change gave us the opportunity to structure various kinds of construction, trade and monetary actions with the formerly separate card row now exclusively devoted to the procurement of raw materials. Thus, the card row in the upper half of the roundabout would be a display in which you acquire raw materials that you would then spend in the lower half to create structures. Equally important in this development was the introduction of the castle space (shown below at left).
The function of the castle is more vital than it might seem at first glance because it creates a wonderful dilemma for players between on the one hand briskly circling the roundabout and on the other slowly cultivating and stockpiling goods. Those who move quickly may build more than the other players, but they might run short on time to collect the raw materials to build as much as they want. Whoever moves too slowly on the roundabout, however, will collect many raw materials but be in danger of coming to the lucrative spots on the board too late.
We were now very happy with Milestones, and our tests proved consistently popular with players. In the course of further development, we therefore focused only on the fine-tuning. We fixed the precise ending of the game, created small bonus chips that helped cement a thematic connection between the shared game board and each player's individual rondel, and started to look for a publisher that would have an interest in publishing Milestones.
We were fortunate that


eggertspiele was able to come to a publishing agreement so quickly after the first games. Just one year earlier, we had a wonderful collaboration with the graphic artist Klemens Franz (on our game Pergamon), and Klemens was brought on board this time, too. Here's one of his first sketches for the individual player rondel along with the final look.
The final version of the rondel shows what high value comes from having a coherent look and graphics that support the game system. The drawbridge in front of the castle depicts in the simplest way that a player must stop at the castle while moving. The legend banner explains symbolically all the possible moves in each space. And the numerous details provided around the buildings create an atmosphere that emphasizes the planning needed for the establishment of the milestones and road network. We thank Klemens Franz for his unerring touch as well as Viktor Schulz, who has overseen the development process and put his stamp on the editorial look of Milestones – which from the initial idea to the publication of the game took about two years.
Another milestone...“
(Quelle: BGG bzw. Kommentar von Ralf zur Linde) 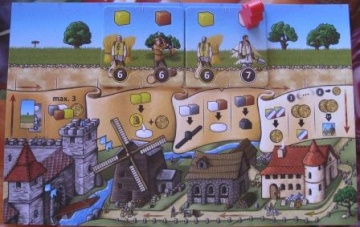 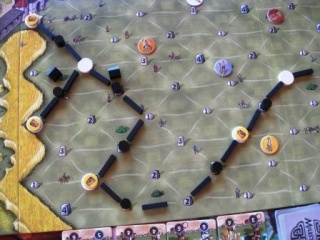 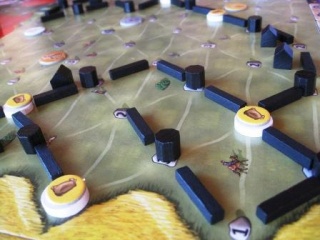