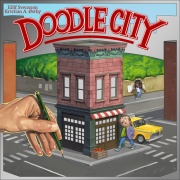 Doodle City is a quick family game of city building. By drawing a network of roads on their play sheet, players are building a city and trying to score points for their hotels, shops and taxis — all while avoiding pollution.

Working out an ideal road network can be quite the puzzle, so before the game begins roads through parks are randomized, making sure that no two games will be alike. Each round, one blue die and one white die more than the number of players are rolled onto the table. The blue die indicates which column the players must use, while each white die indicates a row. In turn each player picks a white die and draws in the given space. In most spaces you draw roads, but in parks you instead build houses. You can draw only once in each space, and if on your turn you cannot draw, you gain pollution.

A building is scored the moment you draw in its space. For example, when you draw a road through a hotel space, you score points equal to the length of the road passing through that hotel. Shops score according to how many houses are currently connected to the shop. There are also bonuses awarded to the first player who connects a shop to a certain number of houses.

The game ends when one player completes the highest possible hotel or shop score, or when a player loses his last tree due to pollution. Final scores are for connected taxis and for having least/most pollution.